On April 16, 2018, the Florida Constitution Revision Commission approved the final proposals to amend the constitution for placement on the November 2018 ballot. The Commission concluded an intense, informative, and immensely productive year. Of the myriad of ideas and proposals considered by the Commission, eight (8) proposals were approved for the November ballot. Each proposal will require 60% voter approval to pass and become amendments to the Florida constitution. 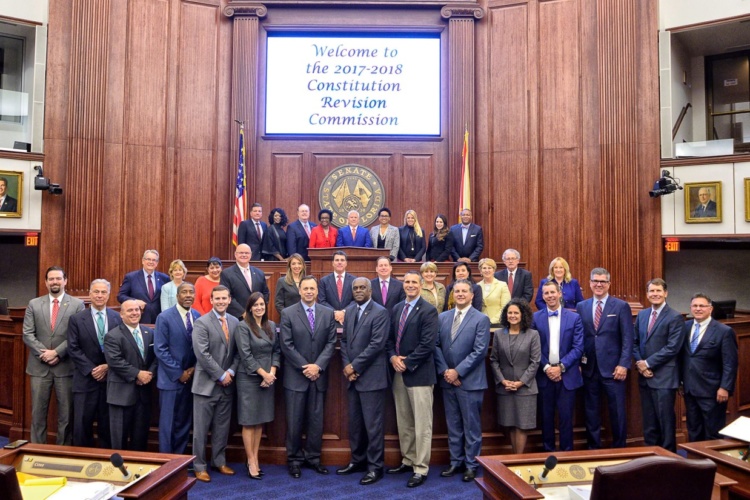 The Constitution Revision Commission (CRC) is a group of thirty-seven (37) individuals appointed to review and recommend changes to the Florida Constitution.  This body meets only once every twenty (20) years to undertake this task. The Governor appointed fifteen (15) members, the Speaker of the House of Representatives and Senate President each picked nine (9) members, three (3) members were chosen by the Chief Justice of the Florida Supreme Court, and the Florida Attorney General was a member as well.

The work of the CRC began after the close of the 2017 Session. Proposals were introduced by Commissioners as well as citizens. The Commission adopted rules of procedure on June 6, 2017.  There was a series of 15 public meetings across the state from March 29, 2017 to May 17, 2017. Tax Collectors worked to observe these meetings and occasionally stepped in to educate the Commission and public concerning the structure of Article VIII of the Florida constitution.  Next, the CRC met beginning on September 25, 2017 to determine which proposals would be formally considered. Those proposals selected were then referred to various subject-matter Committees of the CRC. Proposals had to make it past multiple committees for analysis, debate and majority approval to move forward. The committee meetings took place from September 25, 2017 to February 2, 2018.  After the Commission’s vetting of the various proposals through these initial committee meetings, another series of public meetings was held across the state of Florida from February 6, 2018 to March 13, 2018.

The report of the Style and Drafting Committee was then sent back to the full CRC to be voted on for final passage. Among the grouped proposals sent back to the full CRC was Proposal 6005 (now Amendment 10), which deals with the structure and operation of government.  Amendment 10 includes proposal 13, sponsored by Commissioner Carolyn Timmann and co-sponsored by Sheriff Chris Nocco and Sheriff Emerald Gainey.

Proposal 13 protects voters’ ability to elect their independent constitutional county officers. These state-constitution offices, including the office of Tax Collector, are created in Article VIII, § 1(d) of the Florida Constitution. This sub-section also creates the state-constitution county offices of the sheriff, clerk of court, supervisor of election and property appraiser.  A sixth office created in Article VIII, § 1(e) of the Florida Constitution is a collegiate body known as the board of county commissioners. Here is the summary language for Amendment 10:

After a robust debate on the floor of the Senate Chambers where the CRC met to consider the various proposals, Proposal 6005 was adopted by the CRC with an overwhelming vote. Twenty-two (22) votes are required for a proposal to be included on the ballot. Proposal 6005 received twenty-nine (29) votes. This marks a victory for democracy. As Commissioner Gaetz said during the debate, “I have always believed in the maxim, ‘trust the people.’” Proposal 13 (now included in P. 6005) protects the people by ensuring that they will always have the right to vote for their independent state-constitution county officers and to hold those office holders accountable at the ballot box.

Commissioner Timmann shared her thoughts on serving on the CRC and the incredible importance of Amendment 10:

It is truly difficult to describe the incredible honor and enormous responsibility of serving on The Florida Constitution Revision Commission, which only meets every 20 years. Over the past year we held meetings across the state and heard about many issues that are of vital importance to Floridians.  Ultimately, we collectively approved eight amendments to our State Constitution to be placed on the November 2018 ballot.

Of great statewide significance, the CRC approved Proposal 13/6005, which will be on the ballot as Amendment 10.  We heard much testimony about the importance of electing independent constitutional officers who are directly accountable to the voters. As one of five elected state-constitution officers in my county, I’m grateful for the professional and educational input from my colleagues across the state, including Florida’s Tax Collectors. All of us share a philosophy that our offices are more responsive to the public and they deserve the right to hold each and every office holder accountable at the ballot box. Amendment 10 protects the right of Floridians to elect their independent constitutional officers – their Sheriff, Tax Collector, Property Appraiser, Supervisor of Elections and Clerk of the Circuit Court.

Sharon Jordan, President of the Florida Tax Collectors Association stated that “FTCA is proud of the work accomplished by the CRC and Commissioner Timmann and her co-sponsors on Amendment 10.  Our state is stronger where the constitution ensures that every Floridian can vote on their Tax Collector, Clerk, Property Appraiser, Supervisor of Elections and Sheriff.”

The Florida Tax Collectors Association voted in August of 2017 to support Proposal 13. The primary reason behind the Association’s support is devotion to protecting the people of Florida. The Association believes that having locally elected, independent, and accountable state-constitution officers protects the community’s ability to determine who will serve in these positions which have a substantial and direct impact on their daily lives. The Association believes further that it is important for all state-constitution officers to be elected and directly accountable to the people they serve.  Elected state-constitution officers know that independence and accountability are necessary to perform their duties in such a way that ensures the public’s trust, transparency, and the integrity of their office.  These goals cannot be achieved if such officials are appointed by the county’s collegial body and report directly to a board or county manager.  Finally, Proposal 13 would simply protect and, in some cases, restore the voters’ ability to determine who will serve as their tax collector, clerk of court, property appraiser, supervisor of elections, and sheriff.

Larry Hart, who chairs the FTCA’s CRC Committee said “we want to thank the Florida CRC and especially Comissioners Timmann, Nocco and Gainey for their tremendous work in listening to the people across the state and passing 8 ballot initiatives including Amendment 10. The election of state constitution makes up the fabric of our constitution historically and Amendment 10 restores the right of every Floridian to vote for an independent Tax Collector. FTCA commends the CRC for taking the first step in ensuring the right of people to vote for their state-constitution officers.”

April 16, 2018 was a landmark day in the fight to protect Florida’s citizens. The Florida Tax Collectors Association commends Commissioners Timmann, Nocco, and Gainey for their efforts to safeguard Florida’s citizens. Moreover, the Association recognizes the vital and significant work of the Florida CRC and applauds the CRC members for spending countless hours reviewing, scrutinizing and recommending proposals to amend the Florida Constitution.